Unlike many authors, Armen Pogharian was not an early reader. He can honestly say he didn’t voluntarily read a book until he finished The Hobbit in sixth grade. He earned a BS in Electrical Engineering from Rensselaer Polytechnic Institute, where he was an Honorable-Mention All-American swimmer. As a USAF officer he worked on classified ‘Area 51’ projects—he never saw a single alien (dead or alive). He later earned an MBA from the University of North Carolina in Chapel Hill and spent more than a decade in the high tech and biotech industries.

Armen’s stories mix elements of science and history with a healthy dose of fantasy. When not writing, he enjoys swimming, playing ukulele (no public recordings exist), and the outdoors. He lives outside Rochester, NY with his wife and family. 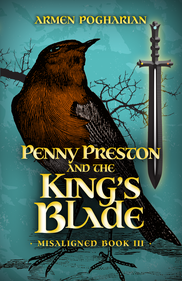 Penny Preston and the King's Blade 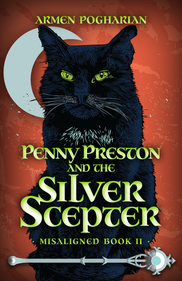 Penny Preston and the Silver Scepter Penny Preston and the Raven's Talisman